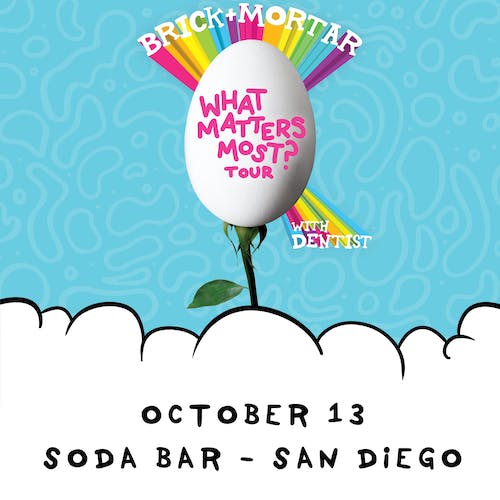 Brick + Mortar encompass a multifarious sound, spanning sweet synth-pop and variants of electric psych to mind-expanding pop and the doomy drum sounds of hard rock who have over 386,000 monthly Spotify listeners along with a devoted fanbase. Riding the high of their latest anti-hate anthem "Lies of Life" , B+M bring a powerful show to every state, garnishing a reputation for their high energy live performance . Music is just the first layer to the therapeutic psychedelic experience that is a Brick + Mortar show, oozing with authenticy combining live music, crowd interaction & unique storytelling with on stage visuals, costumes, performance art and animations by fringe artist Richie Brown.

The pair built a world for themselves musically by combining catchy melodies, eclectic electronic elements, and intense live instrumentation. Brandon's lyrics draw from his struggle to cope society and its injustice as well as his own with issues of abandonment, anxiety, depression, and being the son of an international fugitive and con man. You know that angsty stuff! As the band matures, they continue to explore darker themes of the human condition with the intention of encouraging empathy, positivity, and self-motivation using their platform to spark positive change on this f*cked up rock we call earth.