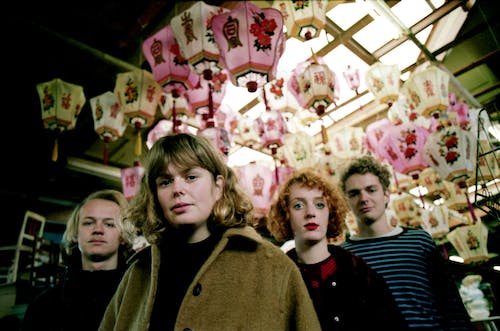 On one of the hottest days of 2018 – and let’s face it, there were a fair few of those – Jeff and Danny from Heavenly were at Sounds From the Other City festival in Salford. They’d heard some singles by Pip Blom and were fighting their way through sweltering, sweat-soaked crowds to see her play for the first time. Pip’s slot clashed with Jeff and Danny DJing elsewhere on-site, so the pair of them tag-teamed back and forth on a motorbike, taking turns to fight their way to the front to see Pip and her band. What they witnessed blew them away. In contrast to the relatively clean sound of the singles and the sweetness of Pip’s voice was a roaring indie punk show which saw the audience climb up the walls and furniture to see the the band thrash around on stage, Pip barely audible over the noise, her brother Tender, topless, throwing himself all over the stage. Jeff and Danny couldn’t believe what they were seeing, it was the first time they had seen the band, and it was the moment they decided to close the door on a jam-packed 2018 by securing Pip and her band. They just couldn’t resist.

It’s no surprise, Pip’s sound is incredibly seductive. The rapidly-spreading intrigue about her music propelled her forward. Out of nowhere arrived this girl who looks like a ruddy-cheeked character in a Vermeer painting, with an endlessly listenable vocal range and catchy songs delivering jerky, angsty pop with an appealingly angelic slant. Like the blue-eyed, butter-wouldn’t-melt qualities of a young Damon Albarn, a big part of Pip’s appeal is watching her or hearing her transform from softly spoken vocalist to really letting rip. Her voice is that of someone who’s always suppressing a smile, there’s sunny energy trapped inside her like a jar of glow worms. It’s infectious, and you can hear it shine through her songs.

Despite her parents being entrenched in the music industry (Pip’s dad was in one of John Peel’s favourite bands, Eton Crop), Pip was too shy to consider being on stage until she uncharacteristically stepped into the limelight when, during her teens, she saw an advert for a songwriting competition. Grabbing her dad’s new Loog guitar (a three-stringed instrument designed for children) she penned a bunch of tracks and entered herself.

A few months later she had written and performed a 20-minute set, got to the semi finals of the competition and, most importantly, firmly realised that this is what she wanted to do. Her favourite band back then was Parquet Courts, so she thought to herself: “’I want to be the female Parquet Courts because…why not?”

Pip tried to recruit a band, but didn’t get very far, so she decided to just plough on alone as a one man show: programming all the drums on a computer, playing bass and guitar and writing all the songs for six months. When she had written four songs she was really happy with she decided to systematically release them, one song per-week on every Tuesday of February.

Before long, one of Pip’s tracks popped up on Spotify’s Fresh Finds playlist and pretty much overnight, word started getting around about this exponentially talented and previously unheard-of teenager from Amsterdam.

After various line-up changes to her band, Pip finally managed to recruit a strong, dream-team of a group. The new ensemble is made up of Darek Mercks on bass, Gini Cameron on drums and Pip’s brother, Tender on vocals and guitar. “It’s great to be with him in a band: he’s not always easy, neither am I, but it’s really nice to be with someone in a band that knows you so well,” says Pip. “Musically, he’s the sort of person that belongs on a stage. You could see that from the first moment when we played live. That wasn’t the case with me, I was very shy but determined to learn. He didn’t have to!”

Towards the end of 2018 the band made Boat: a collection of undeniably Pip Blom songs delivered with a bit more bite. “Before we had even made the album I had decided that I wanted to call it Boat after I envisioned a really big cruise ship in the even bigger ocean,” Pip explains. “When I think of boats I think of journeys, traveling, going somewhere and having a goal. And I think that that has been what the last couple of years have been for us.”

Boat was recorded in Big Jelly Studios in Ramsgate with Dave McCracken who’s previously worked on albums by Ian Brown and Beyonce among others. It’s no surprise that Pip wanted to record the album in the UK. She’s a total, self-confessed Anglophile. She’s obsessed with Glastonbury despite never having been, she adores and is audibly inspired by Britpop, and it’s some of the UK’s radio DJs that first gave her the leg up that she needed. “Our focus has been on the UK from the beginning,” says Pip. “One of the producers from Mark Riley’s show had one of our songs in her Discover Weekly playlist and he really liked it and started playing it quite often. We thought; ‘well, alright, people like it in the UK, so let’s go there and play.’

Pip and her band arrived at Big Jelly in Ramsgate with 19 songs which they whittled down and perfected, infusing each recording with their experiences of living together in the studio, swimming in the sea, and making music together as a new band. After a few weeks, the finished Boat was mixed by Dilip Harris, requested by Pip because of his work with one of Pip’s favourite bands Micachu & The Shapes.

The record opens with Daddy Issues: nearly five minutes of indie power blasting you into the album. “When you hear those first power chords coming in, you know that Daddy Issues is the only candidate to open the album,” says Pip. To be honest though, there isn’t one track on Boat that couldn’t be the opener. It’s a ragged but punctual journey of sugar-coated indie punk, showcasing a band who seem to have found the ability to effortlessly churn out hit after hit after hit.

Pip’s in a very interesting space sonically; with the help of a dedicated band, Pip has evolved her sound away from simple, hooky tunes to expertly-crafted songs with unassuming depth. Although, she’d never actually admit to it. She’s too modest. “I hope that if you listen to boat, you can hear the different routes we explored…We took our time and it was quite a journey, but I think it was time for us to finally release an album,” says Pip. “We’ve grown so much as a band, both live and in terms of songwriting. Our boat hasn’t reached its final destination yet, but if think with releasing this album, it’s a great pit stop.”